This Steyr-Puch Pinzgauer Is Rolling Art

If you’re looking to own a piece of art that you can drive on tough off-road trails, we have the truck for you. Thanks to an upcoming auction by RM Sotheby’s you can own a military-derived truck customized by artist Nico Sclater, a.k.a. Ornamental Conifer. This rugged Steyr-Puch Pinzgauer was built to handle the toughest terrain around the world with precise engineering and simple construction.

From 1971 to 2007 Steyr-Puch built the Pinzgauer for military transport applications in the toughest theatres of operation around the globe. Power comes from a 2.5-liter air-cooled inline-4 the produces a weak 87 horsepower. The top speed of the Pinzgauer is around 60mph so don’t expect to get anywhere you want to go quickly. To keep things simple the Pinzgauer uses a 5-speed manual transmission mated to a 2-speed transfer case. The real magic of the Pinzgauer lies in its off-road capabilities and customizability.

The Pinzgauer came in either the four-wheeled 710 model or the six-wheeled 712. Regardless of wheel count, the Pinzgauer made use of portal axles to achieve better ground clearance when taking on tough terrain. The 710 models could easily be converted to a six-wheeled 712 model for owners looking for better traction and more likes on Instagram. This particular Pinzgauer started off life as a four-wheel 710 model and was converted to the six-wheel 712DK configuration.

Artist Nico Sclater took his Pinzguer and made it his latest canvass adding unique artist touches to every surface. This interesting take in functional art is Sclater’s specialty as he seeks to put art on interesting canvasses.

RM Sotheby’s has a guide price of $60,000 to $80,000 for this special Pinzguer. This is quite a lot of money considering typical Pinzguer 712 routinely sell in the $30,000 bracket but that’s the price you pay for a piece of artwork. 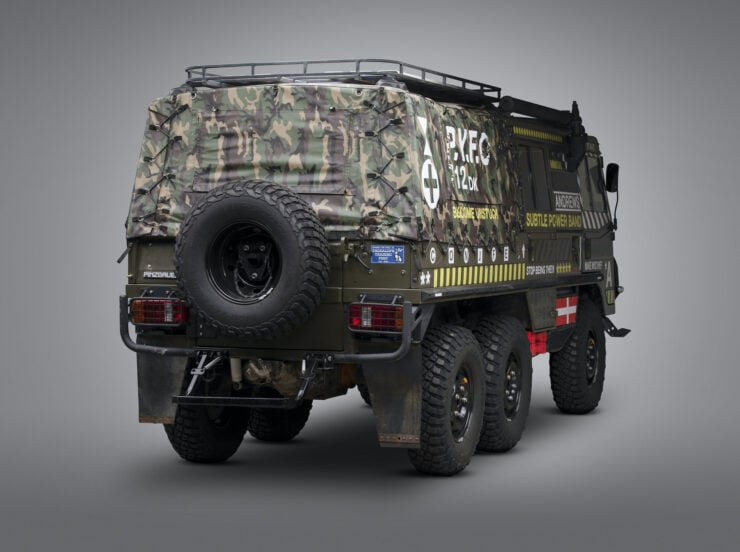